I haven’t had much time to produce this week as I went to stay at my sister’s over the weekend with daughter and school ted in tow. It wasn’t the most relaxing of weekends as it involved National Rail, Primark on a Saturday and freezing temperatures, but fun was had by all and made even better for me as I finished two successful sewing projects prior to going.

No1  was the Moda Quilt Along trivet I described in my previous post and No2 was the last, so far, in a long line of ….well, ok only four…. purses. Here’s where it started: 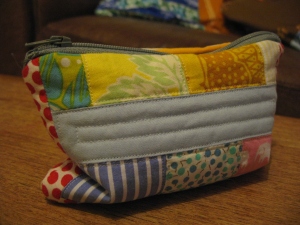 To be honest I was really pleased with how this turned out, the only problem was the zip ends. I couldn’t find an explanation of how to stitch these – whether they should point towards the lining or the outer fabric, how to get them to lie flat or how to avoid either a gaping hole or the ugly puckered look.

PS I forgot, I know that edging looks quite nice, but that’s only there because of my poor calculations leaving the purse half an inch too small so I came up with the cunning plan to add the spotty border and actually I quite like it.

I was certain I’d get it right this time. I did a bit of quilting, practised some freehand embroidery and then carefully pinned the zip in place before sewing slowly over the ends.

Hmmm, not bad…. but wait let’s take a closer look:

What’s this, it can’t be, nooooooooooo another gaping hole! Even worse I sewed too close to the plastic bits so it’s a wonky gaping hole. Time to hit the search engine again, come on let’s google….

Aaaah, finally an explanation in the form of flossieteacakes and even better, a new technique that hides my shoddy workmanship…hooray for zip covers. Flossie’s purse tutorial makes things so much easier, but of course I couldn’t get it right first time, I mean why break a habit of, uh, the last year.

Once more see below: 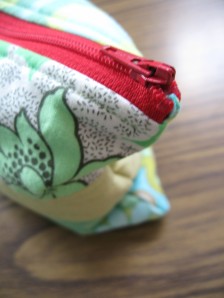 This time my lovely covered zip ends disappeared, I so wanted this to work as the bag was so pretty. I unpicked the seams and restitched, unpicked the seams and restitched, but in the end I resigned myself to the fact that it just wasn’t going to happen. Upon reflection I realised that although I really had done everything right this time, it was my choice of materials that was wrong as I had chosen to use a fusible fleece. My only option was to either change my materials or change the pattern. I chose the latter.

Off I went again, this time (as always) I was determined to get it right…..it really shouldn’t take this many attempts. Anyway, in the end it turned out all I needed to do was to make the outer fabric about a 1/2  an inch larger to make sure that when I turned the purse out there was enough room for the covers to show without being all squished.

This is the end result: 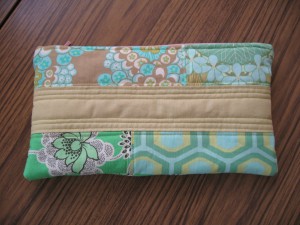 That’s enough sewing for now, I need a rest and as the saying goes a change is as good as a rest so that’s what I’ll do, next post felting…………..

One thought on “Perfecting Purses”

Sewing at the Speed of Sound

Wasn't Quilt in a Day

Since Rome wasn't either, I'll take my time.

about the life of a modern traditional quilter

Dressmaking and living colourfully in London

Express yourself. It is later than you think.

I gotta eat, I gotta sleep, I gotta make stuff.